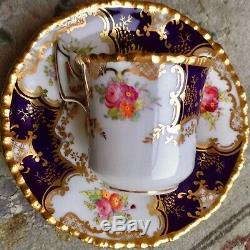 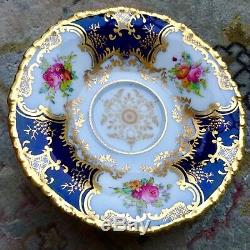 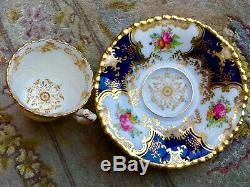 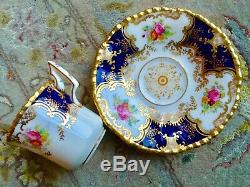 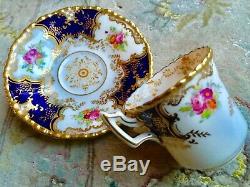 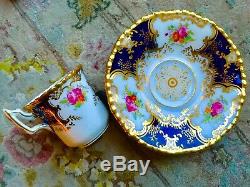 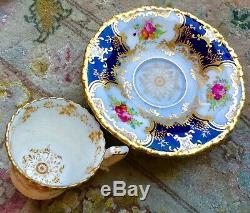 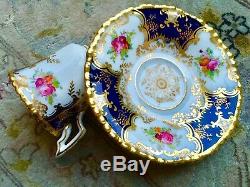 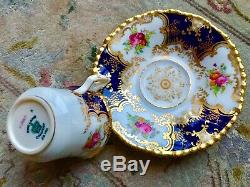 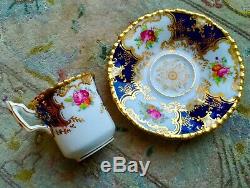 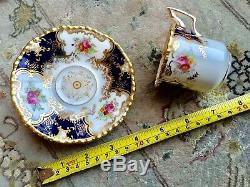 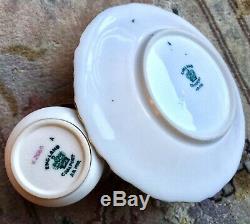 Please browse all 12 photographs for size and condition as they are self explanatory. The Coalport porcelain manufactory (or Coalport China), the first porcelain factory in Coalbrookdale, Shropshire, England, was founded by the practical and enterprising John Rose in 1795, at Coalport, served by the Coalport Canal, which had been completed in 1792.

Rose had trained at the Caughley porcelain manufactory in Shropshire and had been making pottery on his own account nearby at Jackfield, a mile upstream across the River Severn from Coalbrookdale, since about 1780. He employed William Billingsley, formerly at Nantgarw, as chief painter, and Billingsley's chemist, Walker, who initiated at Coalport a maroon glaze and brought the Nantgarw technical recipes to Rose at Coalport. In 1820 Rose received the gold medal of the Society of Arts for his feldspar porcelain and an improved, lead-free glaze, with which the enamel colours fused in firing. Favourite patterns were the "worm sprig" and the "Tournai sprig" introduced by Billingsley at Pinxton, the Dresden-inspired "Berlin china edge", and the blue transfer willow pattern and blue dragon pattern. During the 1830s the factory initiated the practice of applying a light transfer printed blue outline, to guide the painters.

This preserved some of the freedom of hand-painted decoration, while it enabled Rose to keep up the pace of production. The technique was widely adopted by other manufactories during the 19th century. John Rose died in 1841; the enterprise was continued under the former name John Rose & Co. At The Great Exhibition (London 1851) an elaborate Coalport table service with deep borders of mazarin blue was shown; it had been commissioned by Queen Victoria as a gift to Tsar Nicholas I of Russia. William Pugh continued the production as sole proprietor from 1862 until his death in 1875, after which the company was put in receivership by his heirs.

1900, who reinstated it as the Coalport China Company. Under the management of his son Charles Bruff from 1889, an extensive export trade to the United States and Canada was initiated in the 1890s, and the works were rebuilt on the original site in 1902. During the 1920s it fell again into financial difficulties and was eventually taken over by the Cauldon Potteries, Ltd. Of Shelton, Staffordshire, in 1925. Llewellynn Jewitt published a History of the Coalport Porcelain Works in 1862.

The original manufactory building is now a Youth Hostel, cafe, artists' studios and a handmade arts & crafts shop. Production later moved across the canal to the buildings which now house the Coalport China Museum. In 1926 production moved to Staffordshire, the traditional centre of the ceramics industry in Britain, and, although the Coalport name was retained as a brand, in 1967 the company became part of the Wedgwood Group. The item "Rare Antique Victorian (1890s) Coalport Batwing (Y2665) Demitasse Cup & Saucer" is in sale since Thursday, April 2, 2020. This item is in the category "Pottery, Porcelain & Glass\Porcelain/China\Coalport\Tableware".

The seller is "santoor-uk" and is located in Salford, Greater Manchester. This item can be shipped worldwide.